All About Ambedkar: A Journal on Theory and Praxis, Volume 1, Number 1, March 2020

In recent years, we have been witnessing a proliferation of English-language books related to Dalit Studies in general and Dr B R Ambedkar in particular. So much so that, for the benefit of the academic world, a frequent survey of the newly published books has become imperative. With this objective in mind, we intend to offer a short survey of the new titles on a monthly/bi-monthly basis. In the following, I would briefly describe six latest books published in January 2020. It may be noted that the purpose here is not to offer an exhaustive critical review of the books but simply to bring these books – my favourite picks – to the immediate notice of the esteemed readers.

The first book for discussion is Aakash Sing Rathore’s Ambedkar’s Preamble: A Secret History of the Constitution of India published by Penguin Books in January 2020. (For image courtesy see Acknowledgements)

The book excavates some hitherto unknown facts to explain the exact role Ambedkar had played in drafting the Constitution of India and emphasizes how the Preamble is, in fact, an “Ambedkarite” discourse insofar as it was almost singlehandedly authored by Ambedkar. If the Constitution of India is the body then the Preamble, as some use the metaphor, is the soul. Hence, the author argues, to understand the nuances of the Preamble, and thus the core values enshrined in the Constitution of India, one needs to carefully read Ambedkar’s writings and speeches. To this end, Rathore divides his analysis into six chapters which are titled after the six key terms from the Preamble, namely, Justice, Liberty, Equality, Fraternity, Dignity and Nation. While he annotates, interrogates and explores the broader semantic and thematic dimensions of these terms, his study brings to the fore the immense contributions of Ambedkar as a revolutionary thinker. The book is available for purchase on various e-commerce websites including amazon.in.

The second book for review is Luis Cabrera’s The Humble Cosmopolitan: Rights, Diversity, and Trans-state Democracy published by Oxford University Press in January 2020. (For image courtesy see Acknowledgements) Cosmopolitanism cannot just be a set of moral principles for the individual, there should also be institutional mechanisms to correctly implement its claims. Partly in light of this idea, Cabrera discusses Ambedkar as a “humble cosmopolitan” who, as he mentions in the Preface, “drew on the universal principles of equality and right in striving to transform a domestic system oriented to segregation, exclusion and inequality.” If cosmopolitanism is thus to be institutionalized then the “institutional global citizenship” could become a reality only through a new form of democracy, a “trans-state” democracy as Cabrera calls it, meant to undermine the arrogance of national sovereignties for the sake of humble protection of global and local rights. According to Cabrera, Ambedkar is an extremely important thinker in the sense that his ideas offer cues for the building of global democracy. This book, based on extensive field-work in India, UK, Turkey and Belgium, is ground-breaking research in political philosophy.

Divided into ten chapters, the book engages with Ambedkar by way of bringing in both academic and activist perspectives. There is an entire chapter devoted to the role of the National Campaign of Dalit Human Rights (NCDHR) in promoting the cause of the Dalits and how its global outreach is obstructed by the Hindutva ideologues. On the one hand, the book takes up a popular slogan about Ambedkar from the Dalit activists, i.e., “We are because he was,” to critique the legacy of Ambedkar in contemporary India. On the other, it critiques the rise of Hindutva politics in India and engages with the question: what is so bharatiya about the Bhartatiya Janata Party? Discussion of Ambedkar includes analysis of the competing discourses on inclusion from Gandhian and Ambedkarite perspectives, theorizing Ambedkar’s views regarding “arrogance of caste” and “fiction of equality,” reading Ambedkar with Immanuel Kant on the questions of “civilizational hierarchy and paternalism,” and critiquing his views in conjunction with idea of cosmopolitanism conceptualized by Martha Nussbaum. The book also theorizes global democracy with reference to the policies adopted by the UK Independence Party (UKIP), by the European Union based in Brussels, and the contemporary political situations in Turkey. The book is available for purchase on various e-commerce websites including amazon.in. The author informs us that all the royalties of the book would go to the non-profit organization GiveWell. Nevertheless, some readers, particularly some young researchers from India, might find this immensely valuable book slightly overpriced.

The third book for consideration is titled Hindutva and Dalits: Perspectives for Understanding Communal Praxis which has been edited by Anand Teltumbde and brought out by Sage Publications in January 2020. (For image courtesy see Acknowledgements)

The book was originally published in 2005 by Samya at the backdrop of the Gujarat massacres of 2002 when the Hindutva forces strategically manipulated the Dalits in joining hands with Hindutva goons in their genocidal attack on the Muslim minority. One must be careful here and not essentialise the Dalit response to Hindutva as one of blind acceptance of the same insofar as not all Dalits had been “interpellated” by BJP. During Gujarat riots, as Teltumbde points out, many Dalits participated in the communal violence but many others also sheltered and saved scores of Muslims. However, even if a tiny section of Dalits turns to Hindutva this is, nonetheless, a matter of grave concern and is a sad commentary on Dalit politics which has theoretically been defined as an anti-Hindutva discourse. We may remember Ambedkar, in this context, who categorically rejected Hinduism and converted to Buddhism because he was convinced that reformation and annihilation of caste would be impossible from within the Hindu fold which would always retain its supremacist dimension in the form of Brahminism. To make sense of the appropriation of the Dalits by BJP, the book thus engages in an analysis of how the Hindutva forces, even with a past of having attacked the Dalits en masse on the issue of reserved seats in 1981, had successfully wooed the Dalits and made them “foot soldiers” of BJP – not just in Gujarat but nation-wide. The book contains a total of sixteen extremely important essays authored by Meena Kandasamy, Anand Teltumbde, V Geeta, and K S Chalam, among others. Given the continuous attempts by the BJP government in contemporary times to victimize the Muslims and even strip the Muslims off their citizenship, the book uncannily evokes the possibility of a nation-wide reproduction of the Gujarat riots and thus immensely contributes in understanding how the Hindutva forces have managed to achieve not just a series of electoral victories but a continuous hegemonic expansion as well. The book is available for purchase on various e-commerce websites including amazon.in.

According to the editors, the term “Guja-ratri” is derived from a Telugu poem – titled “Nenu" (literally, "I") written by the poet-activist K. G. Sathyamurthy – which is based on the 2002 Gujarat riots. The book is a collection of critical essays containing Bahujan perspectives on the rise of the right-wing leader Narendra Modi. Against the backdrop of the teachings of Dr Ambedkar who had repeatedly claimed that Hinduism was ideologically opposed to the democratic principles of liberty, equality and fraternity and who considered Hindu Raj to be a menace for India, the book engages in passionate reflections on “Moditva.” However, the authors of the book – many of whom are engaged in ground-level activism – are careful to not consider the Gujarat massacres as the only defining moment because the roots of Hindutva, as they claim, go much deeper. In my view, this book, like the previous publications from The Shared Mirror, promises to be an eye-opener for the reader. The book is available for purchase on amazon.in.

The fifth book for review is The Famished Gods: Speaking Selves in Akkarmasi edited by Praveen Kumar Anshuman and Ravi Prakash Chaubey, published by Pharos Books in January 2020. (For image courtesy see Acknowledgements) 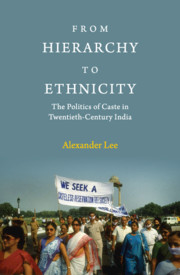 Divided into eight chapters authored by eight different contributors, the book offers critical observations on Akkarmashi (The Outcaste), the famous autobiography of the Marathi Dalit writer Sharan Kumar Limbale. The phrase “famished gods” refers to the Dalits who function as the life-force for the Brahminical society and yet starve to death. As such, the book explores the significance of the motifs of food and hunger that pervade Limbale’s autobiographical narrative. Although the book contains some editorial flaws, it might be of use to the students of Dalit literature. The book is available for purchase on amazon.in.

The last book I would like to mention here is Alexander Lee’s From Hierarchy to Ethnicity: The Politics of Caste in Twentieth-Century India published by Cambridge University Press in January 2020. The book thoroughly examines the issues of identity politics and identity activism from within a historical framework and traces the conceptual trajectory of caste-based politics of identity in India. Lee argues that this trajectory involves an increasing possibility of reading the discourse of caste in India in conjunction with the discourse of ethnicity in other parts of the world. The book is available for purchase on various e-commerce websites including amazon.in.

This is to acknowledge that the photographs of the cover pages of the six books are respectively derived from a) Website of Penguin Books, b) Website of Oxford University Press, c) Website of Sage Publications, d) Website of The Shared Mirror Publishing House, e) Facebook Page of Pharos Books, and f) Website of Cambridge University Press. I am also grateful to my friend Kuffir Nalgundwar for providing me with information and clarification regarding the poet-activist K. G. Sathyamurthy.

Dr. Mahitosh Mandal is an Assistant Professor of English at Presidency University, Kolkata. He is the author of the book Jacques Lacan: From Clinic to Culture (Orient BlackSwan, 2018). His areas of interest include Dalit studies, Lacanian psychoanalysis, and Holocaust studies.